As part of a Greek Life Organization (GLO), you know how expensive it can be to operate such a group. There are various dues in addition to expenses for hosting events, maintaining a house if you have one, attending convention, the list goes on and on. Of course, individual dues are a decent source of income for a chapter. However, dues that are too high will discourage potential new members (PNMs) and may become too much for actives as well. This leads me to the topic of the day: Fundraising.

Fundraising is part of every GLO’s world. But what are the best ways to raise money? My advice would be to try a variety of things throughout the year. This will help you cater to a broader audience so that you don’t have to constantly ask the same people for money. Also, try fundraising opportunities both on and off campus! Here are some tips:

Keeping It On Campus:
One fundraiser that always went over well for my chapter was selling t-shirts. We would create a unisex design that displayed the name of our university. This allowed us to sell to the entire campus, rather than just Greeks. We chose around three color options and also had a sweatshirt option. We ordered a few samples and set up a booth on campus to sell. Typically, we would sell for a few days to give people time to bring their money. Instead of pre-ordering and selling the t-shirts then and there, we would have people sign up and pay for their shirts, then place our order. This allowed us to avoid ordering too many items and adding extra expenses! *Keep in mind that designs typically need to be approved by the university. Design your own HERE!

^ These are the shirts we sold last year!

Tournaments can be another great way to raise money- if you do it right! The key is keeping your expenses low. For example, as a fundraiser to support our philanthropy, we hosted a volleyball tournament. We promoted the event with fliers and on Facebook. Each participant paid $10-$15 dollars (which included a t-shirt for incentive) to play. Our university allowed us to reserve the gym for free and we contacted parents and local business owner’s to donate food or money for the event. All of the food ended up being donated, so we made 100% profit off the concession stand. Not only was this a great fundraiser for our philanthropy, but everyone had a ton of fun, and we were able to promote our name on campus. *Remember, if you do this type of activity, you will need to have participants sign liability forms. You can usually get these from athletic directors or other university personnel. 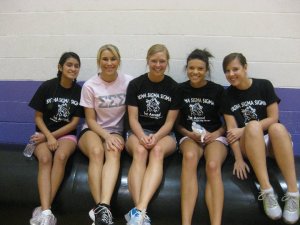 ^My sisters and I had so much fun playing in the tournament all day!…Even though we lost and some of us were a little sore the next day! The black t-shirts are the ones that each player received; they included the names of the sponsors on the back!

Also, take advantage of the events that your university hosts. Our campus had a Fall Festival every year and allowed us to sell soda and water. Some of the drinks were donated, which helped increase our profits. We also had coozies printed and sold them for an extra dollar or so. This was very successful for us! Design your own on Greekgear.com.

If you are trying to raise money for a philanthropy, try doing a “Dorm Storm.” This can actually be a really fun activity for the chapter! We threw on our letters, grabbed a bag/bucket, and went up and down the halls of each dorm knocking on doors. We just asked for spare change or whatever they were able to donate. Not only did we raise a couple hundred dollars, we also made some new friends just by chatting with other students in the dorms. This could also be a great way to do some PR around recruitment time! *This will probably be more successful if the proceeds are going towards your philanthropy rather than convention, a house, etc. because people are more willing to donate to a charitable cause.

Taking It On and Off Campus:
Food fundraisers usually go over pretty well with college students (if you can imagine that!) but also get families, faculty, and staff involved. Krispy Kreme has a fundraising program that I have worked with numerous times and has always provided positive results. Basically, you tell them how many dozens of donuts you want and they package them up for you. You go pick them up, mark up the price a bit, and sell sell sell! This is a great fundraiser to utilize during sporting events. Although I never had the chance to test this theory- I always thought that selling Krispy Kremes at a football game would be a huge success! You can find more information HERE.

Another food option is Butter Braid. These are delicious and always a hit! I suggest selling these around November and letting your members take order forms home with them over Thanksgiving break. This allows members to be around extended family and friends, which will result in more orders. Plus, more people will be baking around the holidays so they are likely to order more! More information HERE!.

During the Spring, try a Yankee Candle fundraiser! You can promote it by saying that these make great Mother’s Day gifts! They also have a wide variety of products at various price points. This allowed me to sell to my peers because they could get car air fresheners for around $10. You make a 40% profit on the things you sell, so I highly recommend this option! More Info on Yankee Candle!

Of course, these are only a few small ideas to get you started- there are millions more out there to choose from! Remember to utilize as many of the resources that you already have to try to cut down expenses. Also, set a goal for how much the chapter wants to earn and then break it down to how much each member needs to earn. Offering incentives to the highest sellers is always a plus as well! Good luck!!