Greek Life: Famous Women Who Were in Sororities

Did you know that according to USA today, all but three US Presidents since 1825 have been members of a fraternity? Also, 85% of Fortune 500 executives were involved in Greek life. How about the females in sororities? Lets see, the first female astronaut was in a sorority, the first female senator, and, most importantly, Elle Woods! I had no idea so many famous women got their start in sororities! Here are a few more leading ladies that got their starts in Greek life and went on to do great things.

Katie was a member of Delta Delta Delta at the University of Virginia. All you Tri-Delts out there, you are in good company!

Condoleeza joined the Alpha Chi Omega sorority while she was a piano/poli sci major. This worked perfectly for her because Alpha Chi was a sorority with musical origins.

Kate Spade went to Arizona State University where she majored in journalism. Spade was an Omega member of the Kappa Kappa Gamma sorority. I personally LOVE anything Kate Spade! Totally adorable. 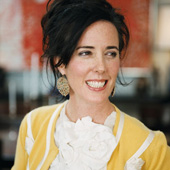 You may not know this name right off the bat, but you will be singing her praises when I tell you who she is. She is the creator of Spanx! The world’s best way to suck it all in when you need to well, suck it all in! She is the youngest woman to be on the cover of Forbes’ Billionaire list and was a member of Delta Delta Delta at Florida State University.

We hope you have learned more about some of the leading ladies who got their start in sororities! They are such an inspiration.